Solvent degradation in the frame at GHGT-15

The LAUNCH CCUS project has continued to disseminate research findings with papers presented at the recent GHGT-15 conference, held online from 15-18 March.

LAUNCH project partners from Europe and the USA are working to establish a fast-track, cost-effective de-risking process for predicting and controlling degradation of solvents used in capturing CO2. Test campaigns are planned at three capture pilot plants and in an industrial environment – at a commercial plant with a capture capacity of up to 0.4 tonnes CO2 per hour.

Knowledge gaps about the degradation of solvents used in capturing CO2 create a key technical obstacle to their deployment by various industries, as recognised by Mission Innovation, a global initiative working to accelerate clean energy innovation.

At project partner RWE’s CO2 capture pilot plant at Niederaussem, in Germany – which captures CO2 from the adjacent 1,000 MW lignite-fired unit of the power plant – three different degradation management technologies will be explored for the CESAR1 solvent.

Partners at the University of Texas at Austin, in the USA, also published work exploring the role of activated carbon in removing degradation products and reducing oxidation in another capture solvent, piperazine.

The solvent has been tested for a total of 4000 hours in a 0.5 MW pilot plant at the National Carbon Capture Center (NCCC) in Wilsonville, in Alabama, with the flue gas for treatment provided by a slip stream from a coal-fired power plant. Various measurement techniques have been used to assess the impact of the activated carbon on the degradation products.

The GHGT conference is held every two years in IEAGHG’s member countries. Due to COVID-19, organisers hosted the event online earlier this month, a move which created a more accessible event, particularly for researchers with a limited travel budget or personal circumstances that would have made travel difficult.


Photo: The ability of the NCCC carbon bed to remove degradation products can be seen clearly. Credit: University of Texas at Austin 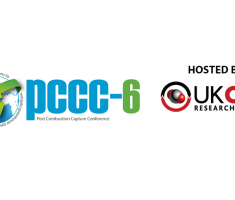